Slowing Down to the Speed of Life

The title of this blog is also the title of a book I haven’t read but have heard about many times. I love the title of the book even more these days than when I first heard about it several years ago. I didn’t fully understand it at the time but these days I really get it. What it means to me is this; that life flows rhythmically and my only purpose is to flow with it at the speed at which it does and nothing more.

I wish I had known this in the many years I struggled and pushed to make things happen rather than allowing what was already in place, to happen for me. This statement may make you baulk at the idea of not striving and driving to succeed and you’d be part of a large percentage of people who feel the same. The cultural narrative for a very long time has been “if it is to be, it’s up to me” and you may have bought into it, just like I did for a very large part of my life.

What I’ve come to realize is that the idea of making life happen rather than allowing life to happen for you, is the very idea that creates suffering and stress. I’m not suggesting for one moment that you do nothing, as has often been purported but that you do what you are guided to do. At this stage I’m guessing you’re rolling your eyes back and wondering how you’ll get anything done if you’re not making lists and ticking boxes and getting out there to hustle.

Had I known back then what I’ve come to see as the truth today, I may have saved myself many years of strain and stress to achieve and maybe not, but I certainly would’ve enjoyed myself a lot more without the anxiety I always felt at trying to get ahead. I see now that there is no competition and there is no reason to worry about my future. There is no other person like me and my future is secure because what is meant for me can never miss me, and that’s true for you too!

Everything in nature operates fluidly without any assistance on my part so I get to just show up each day and enjoy life. Since I am part of nature then that must be true for me too. As much as the planets are spinning perfectly in time around the sun, I am moving about in sync with nature and everything I need will be shown to me at exactly the right time, unless I choose to react to life and resist what is happening.

I’ve seen this fact to be true with everything in my life and the more I notice just how perfectly things are unfolding for me the happier and content I feel. It’s a phenomenon that isn’t easy to explain but once felt, cannot be ignored.

These last few months I’ve seen just how magnificently life works when I respond to the nudges I receive to do the smallest things that turn out to be part of a big puzzle that is taking shape.

Just a few months ago I could never have seen what was on the horizon as I showed up each day and did what felt like the next right thing to do. Small actions like sending a message to someone who popped into my consciousness and that person turning out to be someone who needed some encouragement. Then just a few weeks later that same person referring me to an organization that had me stepping up to new adventures and developments I could never have achieved without the divine intervention of the person that popped into my head. I could relay dozens of stories similar to this and if you’ve been following me for a while, you would be privy to some of these wonderful stories.

Can you recognize where you’ve been led and see the synchronicity of things happening for you? Sometimes the event or circumstance that seems like the worst nightmare turns into a blessing later on. I know how dark and difficult things can appear when you’re in the middle of something that feels challenging and that’s normal. This quote by Sydney Banks describes it well:

“Life is like a contact sport; you’re going to get some hard knocks along the way”
As much as that is true, what is also true is this:
“Wise people find happiness not in the absence of such hard knocks, but in their ability to understand them when they occur” ~ Sydney Banks

I know that this can feel challenging but I’m hoping you see the truth of it. Life is going to happen, whether you flow with it or not. Usually the answer to our problems is a simple one but we tend to overthink things which results in over complicating them. These words also by Sydney Banks sums it up beautifully:

“The solutions to outwardly complex problems created by misguided thoughts will not arise
from complicated analytical theory, but will emerge as an insight, wrapped in a blanket of simplicity” 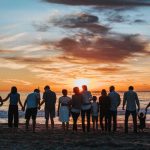 Expression not suppression is the path to peaceSharon's Blog