“Experience: that most brutal of teachers.
But you learn, my God do you learn.”
― C.S. Lewis

Just over two weeks ago, my sister of 72 died suddenly and in moments my life changed.

Receiving a call from my niece (my sister’s only child) who lives in Australia, early on Friday morning the 10th of April, which was also Good Friday in the Christian calendar, was the alarm bell ringing that something was wrong. She called to let me know that my sister, who lived in a Care Community about an hour from where I live, was unconscious. It was 6.30am and I was still relaxing in bed with my husband enjoying our morning coffee.

My sister had woken early and after getting up to go to the bathroom, she called for help because she was short of breath. She had been struggling with her breathing for a while and being a smoker all of her adult life, her lungs were compromised and her health wasn’t great. She had been in hospital about 10 days before that but seemed fine in the days leading up to her death although complained of not feeling well on occasion.

Just 20 or so minutes later, my niece called again but when I answered it wasn’t her voice I heard but her husband’s voice, and I knew that the news wasn’t good. My worst fears were confirmed and he gave me the sad news and the rest of the day is a complete blur.

Being in a state of shock removes all rational thought and cuts you at the knees. A deep pain gripped my heart and minutes rolled into hours, as I gathered myself to do what needed to be done, as I am the only living relative that stayed close to my sister.

My sister’s name was Virginia but I called her Nan. Apparently, when I was a new born, my mother had to hire a nanny to help her to deal with the daily chores of a mother as my birth was complicated. I ended up calling my sister Nan and the nanny by her name of ‘Martha.’ The name of ‘Nan’ stuck and all my children and grandchildren addressed my sister by the same name.

My mother, who at almost 40, was embarrassed to be pregnant with me, having an older son of almost 20 and another two children of 11 and 9, felt that this “laat-lammetjie” (Afrikaans for ‘late-lamb’ meaning the unexpected arrival of a child born to aging parents). It wasn’t cool in those days.

My sister helped to raise me from birth as my mother was not only an older mom but also briefly lost the full use of her hands, due to the complications during my birth. My mother was in labor for 4 days and we both almost died. Nan became my care-giver until Martha came along.

Our family was poor and my father was an alcoholic taxi driver, so money was tight and luxuries non-existent. My mother relied heavily on my sister for help with me and Martha only helped when my sister couldn’t. Nan was still at school and it must have been hard for her although she always spoke about having a real-life doll to play with. I was loved and adored, and I felt it and even growing up into an adult, I felt the love that my sister had for me.

Of course, no relationships are without their issues and I used to reprimand my sister often, once I became keenly interested in health and longevity. I had the best examples of how not to live having been witness to my father’s death when I was 9 years old (he died of a heart attack the month he turned 52) after abusing alcohol and smoking all his life. He was an ex prisoner of the 2nd World War and struggled to deal with regular life. I imagine that post-traumatic stress disorder might have been why he was physically and emotionally abusive to his family, although at the time there was no medical term or diagnosis for those who must have endured untold suffering.

My mother died when I was 28 years old after suffering with extreme emphysema, after smoking all her life and was bed-ridden for the last years of her life on oxygen support to help her breathe. She died a horrible death after refusing to eat for the last 3 weeks of her life because she knew we would not stop nebulizing or oxygenating her, when we felt she needed it. She didn’t want to carry on and we wouldn’t let her give up so she took control the only way she could, and just closed her mouth whenever we tried to feed her.

I loved my sister deeply. She was like my mother for a long time. She would always take my side when I would complain about anything and she made a big impact on my life as a young girl.

She was a provincial netball player and top coach and she introduced me to the sport at the tender age of 9 and I went on to achieve well in the game and played alongside her in the top leagues and for my province well into my 40’s. Her husband died at 62 of lung-cancer. She was 58 and she never dated or married again and her family was everything.

For a large part of my life I was angry at my sister for not taking better care of her health. She and I witnessed my mother suffer indescribably in her final weeks of life, and I wanted my sister to make healthier choices. That makes two loved ones that she witnessed dying of a smoking related disease, but for all our efforts we could not change her.

My sister often saw life in a ‘glass half-empty’ way and wasn’t always easy to please. I used to complain about how I longed for her to be different and how I wished she would realize what she was doing to herself.

In later years I came to realize that it is not my job to fix people and that unconditional love is the only way to nurture relationships.

We speak of this so easily – how love is the answer and that judgment and criticism distances those we love rather than brings us closer together, yet we still criticize and judge and think we know the best way that people should live. I have pondered on that greatly these past few weeks.

What I have come to realize is that everyone is doing the best they can and they live their lives according to the way they think.

And that is where the greatest revelation happened for me – given the thinking each of us has, our lives will unfold in the way we perceive circumstances to be – not the way reality is but the way we think the reality is.

For a very long time I believed that in order to be happy and fulfilled, I had to have a big house, a fancy car, a big business and lots of money in the bank. I also believed I had to guide my adult children, tell my husband where he was wrong and I was right and convince everyone of my beliefs.

How wrong I was.

In the current lockdown situation, it’s clear to see how much is not in our control. Trying to change people has to be one of the most futile endeavors of all time. We cannot.

Permanent and transformational change can only happen from the inside-out. Trying to change from the outside-in is short lived and uses an enormous amount of energy often leading to exhaustion and frustration.

Once I discovered that I could go double the distance with less effort, I started to live in this way – checking IN and FEELING what the next best step was to take in every area of my life and it’s been remarkable.

Soon after my sister’s death, I could FEEL that I needed time to mourn and now, a few weeks later, I am so grateful that I did. Today I FEEL ready to work and coach and I am all the wiser for having ‘listened’ to the wisdom from WITHIN.

We have all experienced grief and some have suffered greatly through this lockdown situation.

Perhaps this time will be remembered as the greatest lesson of all – that we are strong and resilient and wise and that we are designed to not only survive, but to THRIVE if we allow the wisdom that is already present in us to be revealed.

My prayer and hope for you is that you have listened for the guidance from within and allowed yourself some time to reflect on the next ‘right’ step to take – we all have that – it’s built into us and it never leaves us.

I for one feel guided to help and give because there are so many others who are in greater need than me. Can you find a cause to give to or a family to feed? There are so many right now.

How are you being guided right now? Follow that. 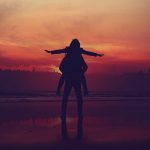 Have you noticed this?Sharon's Blog 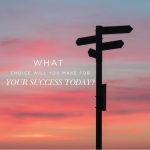